A review of ‘Melanie’s Marvelous Measles’

Although it only appeared last month, Melanie’s Marvelous Measles, written by Stephanie Messenger and published by Trafford Publishing, was raising hackles more than a year ago on the strength of the author’s promise to “[take] children on a journey to learn about the ineffectiveness of vaccinations and to know they don’t have to be scared of childhood illnesses, like measles and chicken pox. There are many health messages for parents to expand on about keeping healthy”.

A recent article by Tom Chivers of the Telegraph  mentions the book in the context of reports that “306 children died in Pakistan because of the infectious disease in 2012, a dramatic surge from the 64 children in 2011”. On Amazon the book got over 70 reviews in three days, every one condemning it.

But of those of you leaping to criticise, I have to wonder how many have actually read the book? I mean, are you not open to the possibility that it might actually contain valuable information that could protect our children’s health?

Me neither. Having recently blogged on the daft complaint about an episode in the Cbeebies Get Well Soon series and having read many, many comments from parents rhapsodizing about the series, saying how helpful it has been to their sprogs and how much it is enjoyed by them, it occurred to me that if Melanie is a cracking good story full of engaging characters and told by a talented and imaginative story-teller, it could be a very dangerous book indeed. I bit the bullet and spent £2.63 on the Kindle edition.

I must say that in this age of cultural diversity and political correctness, it is refreshing to find a children’s book whose characters have managed to hang on to good old 1950s values (as well as clothes and hairstyles). Mothers are homemakers, boys play football, girls play with dolls and fathers don’t feature at all – presumably because all the action takes place during the daytime when they’re at the office.

Here’s what happens in the book:

Melanie is off school with measles. Some children in her class are scared of catching measles. One sanctimonious little twit named Jared announces that he won’t catch measles because he’s been vaccinated and that the unvaccinated boy next to him, Travis, is going to die. Travis, while missing the point entirely, still manages to pwn Jared by pointing that, although he hasn’t had any jabs, he’s still alive.

Jared didn’t know what to say to that!

Melanie’s friend, Tina, goes home and asks her mother about measles. She is told that,

For most children it is a good thing to get measles…Many wise people believe measles make the body stronger and more for the future, 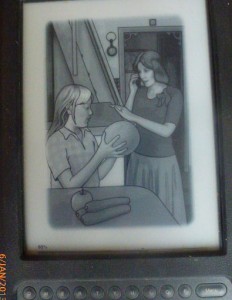 We learn that Tina is unvaccinated because when her old brother, Sam, got jabbed he was very sick afterwards and, although he apparently recovered enough to lead a normal life and go to football training after school, he now has a “weak immune system”.

Having been persuaded that getting measles is just about the most fun a child can have, Tina wants to visit Melanie so she can catch measles. Her mother thinks that’s a “great idea”. (I assure you I am not making this up; it really is in the book.)

They visit Melanie who, as it turns out, was vaccinated and yet managed to end up with the “worst case of measles the doctor had ever seen”. But Melanie is proud of her big spots and can’t wait to show them to her friend. She says they’re not itchy or hurty at all and she is quite well enough to be up playing with her dolls like a proper little girl.

Tina and her mother take her some carrot juice and melon, so that Tina’s mother can give readers a mini-lecture on the importance of Vitamin A, probably picked up from some quack magazine.

I read that if your body has plenty of Vitamin A, you won’t get measles…

Happily, Melanie gets better and Tina laments that she didn’t catch measles. Cue another lecture from Mum about the benefits of her healthy lifestyle of raw food, exercise, sunshine, etc. 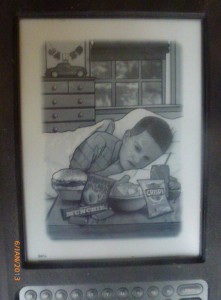 The totally unexpected twist, of course, is that the smugly vaccinated Jared does get measles. Tina isn’t a bit surprised, given all the sweets and other crap he eats. We’re not told as much but presumably all those sweets he’s been eating is the reason why Jared doesn’t seem to be enjoying his measles nearly as much as Melanie and is lying in bed looking miserable instead of up and playing happily with a train set or something.

In spite of the story ending abruptly with Tina expressing the hope that one day she’ll be “lucky enough to catch measles”, she says nothing about visiting poor Jared.

Serves him right, I guess.

In a nutshell then, the book is intended to convince children that: (1) Not only do vaccines not work but children who are vaccinated are more likely to get the very disease they are vaccinated against; Then again, (2) measles is a mild disease, if you get it you’ll probably hardly notice it, unless you have a weak immune system from eating a poor diet; (3) vaccines, on the other hand, can make you very sick; (4) Best thing to do is strengthen your immune system by eating the right food because that will stop you getting measles. Notably, the recommended diet and lifestyle resembles the one I and many of my generation were given as young children. As far as building immunity against infectious diseases went, it didn’t work for us.

And, in case it isn’t obvious, here’s the really good news:

As a book for children, it has no redeeming features. It is unclear what age group the book is aimed at but no child of any age is going to be absorbed by these boring and humourless characters because they have not been created to entertain or enthrall them. They are but one-dimensional mouthpieces for the author’s anti-vaccine message, which is leadenly delivered in painfully forced dialogue. Badly written and singularly unengaging from beginning to end, Melanie’s Marvelous Measles is, I’ll wager, a book that no child would choose to read for themselves.

What this means, of course, is that it will be forced on them by heartless parents but, to be honest, the book doesn’t actually add anything to what they will be telling their children anyway, assuming they are all, if I may bother a phrase from Tom Chivers, “some hippie-dippie Age of Aquarius type who thinks Natural Equals Good”.

39 thoughts on “A review of ‘Melanie’s Marvelous Measles’”