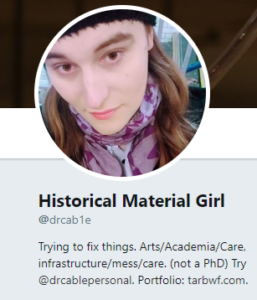 Cable tweeted a lot after the assault. I wasn’t aware of it at the time and for some reason – perhaps on the advice of the solicitor he eventually found? – he has now deleted his tweets. But I found them all stuffed down the back of the sofa, so to speak.

First, I’d like to thank Cable (or, to use his full academic title, Ada Cable) for stating what I originally believed to be true about the person who grabbed and smashed my camera. He didn’t feel like a woman when I was hanging onto him trying to stop the thieving toe-rag running off with my property but a couple of witnesses who caught sight of cowardly thug running away said they thought he might be a woman. Although taller than me, he was so puny I felt I could have made mincemeat out of him, so I was temporarily persuaded they could be right.

But then on Twitter people trying to hide his identity started to insist that he was ‘AFAB’ (female at birth). That’s what’s known as ‘protesting too much’ – do they really think I’m as stupid as they are? So I reverted to believing he’s male and Cable – who is probably a friend of his – confirmed it.

Now look at this piece of crap:

As if the police who were called to the scene would tell me I was “punched in self-defence” on the basis of a few seconds footage watched on someone’s phone. Muppet!

Actually, what the police officer did was ask me what happened. I was in shock and couldn’t say much. She examined my camera, confirmed that it was broken; looked at my face, confirmed that it looked as if I’d been punched and said they would log the incident and I would receive the Crime Reference number as soon as possible. (I actually got it three days later). 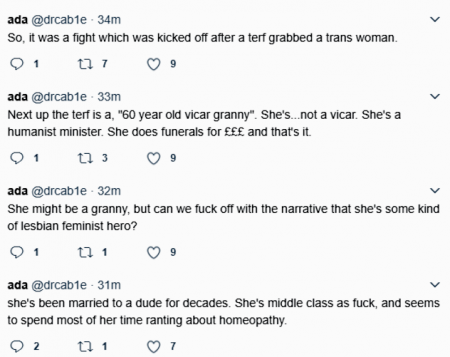 Now here’s a curious selection of tweets which suggest Cable and some of his followers think that what I do to earn money these days, what I campaign on, my social class, sexual orientation and marital status makes a difference to anything. Does any one of those things make assaulting me more justifiable? I wonder what Cable’s parents – who, I’m told, are  respectable business people residing in a village outside Huddersfield – would think?

As for being ‘middle-class as fuck’…yep! I’m just relieved as fuck that it seems to be the only thing I’ve got in common with this thoroughly nasty piece of work. You won’t find me promoting or celebrating hatred and violence against anyone I disagree with. 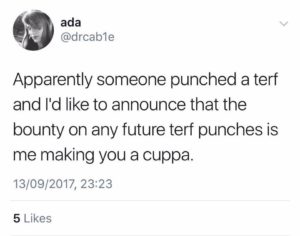 In the light of his support of intimidation and promotion of physical violence against ‘TERFs’, his suggestion for an excuse people use for bottling out a TV debate isn’t the least bit ironic or hypocritical. Nope, not at all. 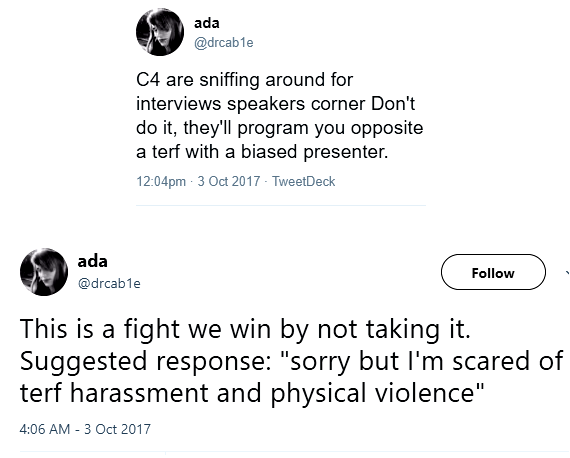 Thankfully, there are still people who are repulsed by the behaviour of people like Ada Cable, trans folk included.

Oh, I almost forgot this one. In order to try to defame me, not-a-doctor Ada Cable went trawling through this blog, found a post I wrote EIGHT years ago when the EDL had just emerged, in which in I wrote that while I understood and shared the anger (at acts of international terrorism or private so-called ‘honour killings’ of young women that would draw people to such groups)  I warned people to steer clear of them. He highlighted half a sentence and puts it on twitter with the announcement that I’m a “literal nazi sympathiser”. Does Ada Cable have an iota of integrity? 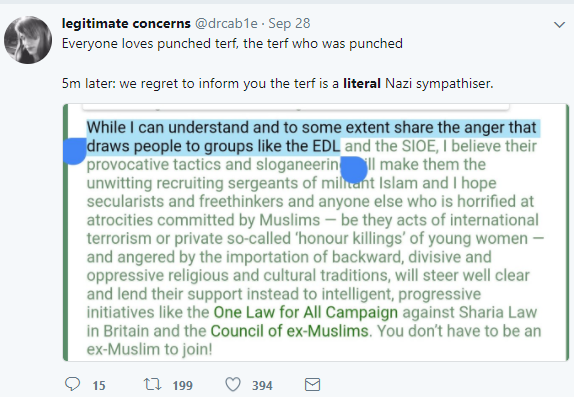 And while there is no evidence that I’m a Nazi sympathiser and a mountain of evidence that I’m not, Cable himself confesses to being an Islamist sympathiser with the wholly pathetic excuse that he grew up in Yorkshire, as if that explains his not understanding the difference between Islam, which is a religion and Islamism, a hateful and oppressive political ideology that guides the likes of Isis and Boko Haram.

Or maybe he really does support them?