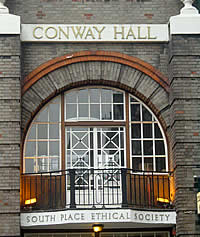 I can think of three possible reasons why women would be dressed like that in the Conway Hall in the heat of summer:

1. They are mentally ill;

2. They are forced to dress like that by their boorish and tyranical menfolk;

3. They choose to dress like that as a political statement.

I’m guessing that the third of these options is the one they’d tick themselves though, in reality, I wouldn’t rule out a combination of all three. To be fair, not all the women there were wearing the niqab. With some of them, you could actually see their noses and mouths. Risky! I’m surprised they didn’t get raped. To be honest, the sight of these ninja sisters openly flaunting just how oppressed they are made my blood boil but even so I’m guessing that I wasn’t as uncomfortably hot as they were.

They were there to attend an event entitled The Great Debate: Sharia Law v British Law. It was to feature radical pseudo-Cockney Islamist, Anjem Choudary — a thoroughly nasty piece of work who defends the murder of people who don’t see things his way thus:

The above quote was lifted from a BBC TV interview about the 7/7 bombers who murdered 52 people in London, included several Muslims.

Opposing him was to be the neo-conservative Douglas Murray, whose talent for hyperbole often makes him an entertaining read, if one hard to take seriously e.g.

Our cowed police appear to have become little more than the militant wing of The Guardian.

( Laughing my arse off at that but I bet Ian Tomlinson‘s grieving family aren’t.)

I’d arrived early for my own meeting so I killed time watching the ninja weirdos flitting about the foyer and up and down the stairs and it struck me how they were so much more visible than anyone else there. I suppose the point of dressing bizarrely is to attract attention to oneself but it doesn’t sit very comfortably with the notion of modesty, as I understand it. It’s those of us who dress to blend in with the crowd who are the truly modest ones, girlies, so shame on you.

I noticed, from my vantage point halfway up stairs, that down in the foyer there was some commotion starting: a crowd was forming around South Place Ethical Society Chairman, Giles Enders, and voices were being raised. Islamists shouting and being confrontational? Surely not! The next thing we’ll have Giles telling us they made death threats. Anyway, my meeting in the upstairs library was about to start, so I left them to it.

Settled with some fifty others into the library,  the shouting from outside the room seemed to get louder and louder. In fact, it sounded like very loud chanting in unison. I wondered if in fact their debate was about to start and they were just kicking off with some weird religious ritual. Whatever it was, it was bloody noisy.

Our speaker was the heroic human rights campaigner, Peter Tatchell, speaking on Multiculturalism and the Subversion of Human Rights. I’m sure the irony of his topic wasn’t lost on any of us and I’ve made notes for a post on it some time.

It wasn’t long before Giles Enders knocked on the door of our room and asked permission for police officers to enter so they could “survey the demonstration going on outside” from the library balcony. The police had been called because he had “refused to respect their segregation of women” and the Islamist brothers didn’t like it.  And, yes, he had received death threats.

When it comes to utterly bizarre and moronic religious or cultural practices, it can sometimes take a long time for the penny to drop with me.

Until that point, it hadn’t seriously occurred to me that the Islamist stewards had been ushering the ninja sisters and other women upstairs because they thought they could practise Sharia in our Humanist Centre and reserve the seating in the main hall for the men and the smaller space in the upstairs gallery for the women.

Presumably there was some objection to this segregation from people who wanted to attend the debate but who didn’t consider themselves bound by Sharia and wanted to sit wherever they chose. As Giles wasn’t about to squander the liberal, freethinking, humanist heritage of the building (and this country) by giving in to the lunatic demands of a bunch of bigoted religious fanatics, he cancelled the debate and the fanatics threw their toys out of the pram and stood outside shouting for over an hour before dispersing.

These thuggish bouncers wouldn’t allow anyone in, so I said we would call the police. But the police took forever to come, so in the end I had to send our maintenance man across to the police station to get them. It became extremely aggressive in the foyer – somebody got hurt and was bleeding. I said to the bouncers that I run this bloody hall and what I say goes and they pushed me away. They wouldn’t even allow me in the hall, so I went round the side way and got on the stage, and made an announcement through the mic that the meeting was not to take place. After I said this I stood on the stage with all the chanting mob screaming at me in Arabic, and pointing fingers like guns at me. Then they then cut the mic I was using, as one of their people was operating the sound control box. Then the main speaker [Choudary] got hold of a radio mic and started shouting in Arabic. So I grappled that off him, and then I sat on the stage.

Was the whole thing engineered by the Islamists as a publicity stunt? Possibly. I did wonder what exactly was the purpose of this debate (as I wonder about the purpose of many public debates). It’s a pretty safe bet that the only people attending would be people who felt passionately for one side or the other (and from where I was looking, I’d say one side outnumbered the other by at least twenty to one) and none of these people were going to have their minds changed that evening or any time soon.

No. According to this report on The Independent newspaper’s website, Murray agreed to take part because “(Choudary’s) opinions have to be countered”. Ah, that explains it. Naturally I wish him all the luck in the world in countering the views of an extremist Islamist in a room packed with his devoted followers.

At least the same report makes the reason for Choudary’s participation a bit clearer:

Mr Choudary intends to re-launch Al Muhajiroun at a debate entitled “Sharia Law vs British Law” between himself and the Centre for Social Cohesion think-tank, which is being adjudicated by the Global Issues Society.

So that’s it. The debate was basically a front for a re-launch party for Al Muhajiroun, a group that wants Britain to become an Islamic state and which was banned by the British government in 2005 for its glorification of terrorism. Perhaps they thought a party on its own wouldn’t generate as much publicity or, indeed, any publicity seeing as no respectable building would’ve let them hire a hall if they’d been upfront about their purpose. Or perhaps they intended to kidnap Douglas Murray and behead him. Who knows?

The purpose of this debate is ultimately for the truth to prevail and for the falsehood to vanquish, and we hope that by this illuminating discussion the British public will experience the superiority of al-Islam over that of the British Law.

As most of the British public neither knew nor cared about this debate and would be unlikely to want to watch it on youtube, one can only marvel at what kind of fucked-up brain produced that particular piece of reasoning. Nevertheless, the idea of the British public experiencing the “superiority of al-Islam” at an event taking place at the Humanist Centre is so deliciously ironic, I almost wish it would happen. Given their obduracy over the relatively small matter of seating arrangements and the hissy-fit they threw when they didn’t get their own way, I wouldn’t rate their chances of winning over the hearts and minds of the British public on anything else.

From the New Humanist blogspot: Battle of Conway Hall

And from The Guardian newspaper: Douglas Murray on why we must debate the extremists

And finally, also from The Guardian: Islamist Al-Muhajiroun relaunch ends in chaos over segregation attempt.

Outside, Choudary criticised British society as “dirty” and predicted that, within one or two decades, Muslims would make up the majority. Asked why, if society was so bad, he was living here, he said: “We come here to civilise people, get them to come out of the darkness and injustice into the beauty of Islam.”

No Sharia: One Law for All