How the spine wizards tried to trap me

I was unpleasantly surprised to find a bunch of spine wizards touting for business in front of my local Sainsbury’s superstore recently. At a time when the chiropractic branch of the…um…’healing arts’ in the UK is fighting tooth and nail to hang on to any vestige of credibility during the current onslaught of challenges by quackbusters, it seemed a strange way for people claiming to represent a serious healthcare discipline to behave. The only other hucksters I’ve seen hanging round Sainsbury’s are car washers. 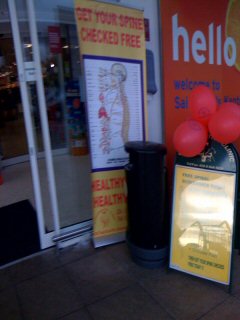 But, hey, they’ve got to make a living somehow and I’ve got to find material for this blog so, naturally, I took advantage of their offer for a free spinal check. It so happened that I was suffering from a bit of an ache across the top of my shoulders and I knew the reason was the terrible posture I’d adopted over the past few months after switching to using a laptop on the couch instead of sitting at a desk.

I asked the chiropractor, Dr Canard, (not her real name and certainly not her real qualification) what she was looking for, as she prodded my neck with cold fingers. I was listening for the buzz word, ‘subluxations’, which is what the original idea of chiropractic was based on, subluxations being out-of-place bones in the spine, which were believed by the founding father of chiropractic, D.D. Palmer, to be the cause of most cases of disease. As I said in a previous post,

Funnily enough, these chiropractic subluxations, didn’t show up in x-rays, an inconvenience chiropractors addressed by changing the definition of subluxation from the partial dislocation that Palmer imagined to “a lesion or dysfunction in a joint or motion segment in which alignment, movement integrity and/or physiological function are altered, although contact between joint surfaces remains intact. It is essentially a functional entity, which may influence biomechanical and neural integrity”. (Source: The World Health Organisation quoted by Wiki.)

But Dr Canard managed to avoid using the word, preferring instead to talk of misaligned vertebrae, which sounds like pretty much the same thing to me.

“I can feel something here,” she said.  To her credit, she had found exactly the place on my neck where I had the most pain and she mentioned my poor sitting posture as a possible contributory factor. I was impressed. But not for long. She could feel several more “blockages” as she groped up and down my spine through my coat and two more layers of clothing, even though I had no pain whatsoever below my shoulders. I asked what a blockage was and I was rewarded with a demonstration involving a model of a spine, with moveable vertebrae. Along the spinal colum were small holes, each with bit of rubber, representing the nerves, threaded through it. A misaligned vertebra can put pressure on nerves protruding from the spinal column, I was told. “These ones here,” she said, pointing to vertebrae in the middle of the spine, “cause digestive problems when they become misaligned.”

“Well,” she said hesitantly, “these nerves here are connected to the digestive system…” Her explanation petered out before it really got going so I’m still none the wiser. She seemed taken aback by my barrage of questions and I didn’t get a satisfactory explanation about anything. What was clear from our exchange was that this was a fundamentalist chiropractor who subscribed to the unproven, implausible and discredited theory that conditions that have nothing whatsoever to do with the spine can, in fact, be treated by “adjusting specific vertebrae that need to be corrected,” even though there isn’t a jot of scientific evidence to support this idea.

On the subject of what treatment I needed, she was more forthcoming: if I made an appointment there and then for a full examination at their clinic, I could have it for the bargain price of £30 instead of the usual £95. I didn’t enquire about the price of the “several sessions” of treatment she thought I might need but asked instead whether simply making a concerted effort to improve my posture might help. “I’d still recommend treatment because the longer you leave a problem untreated, the greater the danger of degenerative disease,” came the predictable reply.

Having stood and watched for a while as other people got their spines checked, I noticed that none of these people seemed to be asking questions as their backs were prodded and poked and, more often than not, they meekly signed on the dotted line for their cut-price appointment. Anyone presenting with any kind of ache or pain in any part of the body was given the hard sell, thereby confirming my previously held view that these people were basically horseshit pedlars whose product, if it could be bottled, wouldn’t look out of place on the shelves of that well-known retail outlet for all sorts of woo, Boots the chemist.

The next day I bought a £15 laptop table from IKEA and my shoulders haven’t ached since.

Finally, for those who haven’t seen this, enjoy!

6 thoughts on “How the spine wizards tried to trap me”