The pen is mightier than the sword, unless you’re Jerome Burne, who describes himself as a health journalist, who’s written for most of the national newspapers and a variety of magazines, in recent years mostly for the Daily Mail. Last year he won an award from the Medical Journalists Association. He also co-authored a couple of Patrick Holford’s books and is mysteriously described by Dana Ullman, of all people, as a ‘leading skeptic’. I confess I’d never heard of him until last week but then I don’t usually read the Daily Fail, so what would I know?

Being an award-winning medical journalist and having done all the careful, thorough and objective research that description implies, Jerome Burne will know all about homeopathy. He will know that it is based on fanciful pre-science notions about disease and he will know that most homeopathic products contain no trace of active ingredient. He will know that the homeopaths’ belief that diluting and shaking an ingredient increases ‘potency’ is irrational because it breaks basic laws of physics and chemistry.

He will know that the totality of evidence thus far indicates that homeopathy works no better than placebo and that putting faith in homeopathy can lead to needless tragedy. Oh, hang on a minute…no, it seems he didn’t know that last bit. He actually says of homeopathy,

Anyway, given that Jerome Burne should have already known of these tragedies, award-winning medical journalist that he is, it was disconcerting to see on his blog last week, an article entitled, ‘Why hounding homeopaths is both batty and arrogant’, in which he describes homeopathy as something “that might, to some, be mildly irritating”, comparable to “people who misplace apostrophes, wear Croc shoes, do crochet, litter their sentences with ‘you know’ and text using their middle finger.”

I wondered what on earth he had discovered that makes it OK for homeopaths to lure paying customers with the claims that homeopathy prevents pertussis and malaria and everything else under the sun, rendering those of us trying stop homeopaths (and anyone else) making false claims in healthcare advertising, “seriously potty”, in Jerome Burne’s opinion. He concludes,

Ultimately what Nightingale is attacking is the intelligence and judgement of people who are trying to find an effective way to heal themselves.

Alas, no, Jerome Burne hadn’t suddenly got wind of the evidence that would finally persuade the scientific consensus that homeopathy is indeed a “highly effective system of medicine”, as its supporters claim, so I won’t bother revisiting the fantasy of just how wonderful it would be for all of us if only homeopathy worked.

It turns out that the reason “hounding homeopaths is both batty and arrogant” is that there are risks involved with taking pharmaceutical drugs. (Spot the fallacy!) We are not told why the risks involved in taking drugs are more important than the risk of putting faith in homeopathy for life-threatening conditions such as heart disease and cancer because, in spite of being an award-winning medical journalist, it seems that Jerome Burne hadn’t done the minimal research needed to establish that people sometimes make this choice for themselves or for their children, with terrible consequences. So much for “the intelligence and judgement of people who are trying to find an effective way to heal themselves”. (Note I’m giving Jerome the benefit of the doubt here. Either he didn’t know or he doesn’t care. Doesn’t look good for him either way, does it?)

I bring all this up because this week Nightingale was supposed to be protesting outside the Advertising Standards Authority (because they haven’t been diligent in chasing homeopaths for making unsupported claims on web sites) and lobbying Parliament (because “something has to be done”).

We just thought this was funny. Of course, as many commenters beneath Jerome’s article pointed out, it was not Nightingale but the homeopathic group called HMC21 who staged a protest outside the ASA. Here’s a pic showing the dilution of homeopaths that showed up, plus Martin Robbins, who has since posted this excellent report. 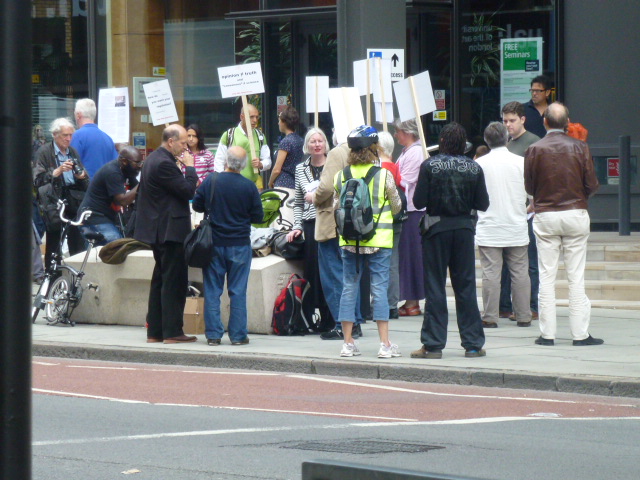 HMC21 are a group who, back in 2010, placed an ad promoting homeopathy in a supplement to the New Statesman, which attracted several complaints including one from the Nightingale Collaboration. (Ah! This must be how poor Jerome got so confused). HMC21 have spent the last couple of years wasting a monumental amount of the ASA’s time, fighting for the right to be able to say whatever they like in their advertising, as have the largest professional body for lay homeopaths in the UK, the Society of Homeopaths, whose website was so appalling it was challenged by the ASA directly.

The final adjudications against both the SoH and HMC21 are published today on the ASA website and are covered in the latest Nightingale Collaboration newsletter, which explains that these two adjudications set the standard against which all complaints about homeopathy to the ASA will be judged in future and which calls these landmark rulings “a victory for consumer choice”.

The issue of consumer ‘choice’ is just a common trope. The real issue is simply whether the advertiser can properly substantiate the claims made. And by ensuring advertisers can substantiate the claims they make, consumers are protected from misleading advertising that would otherwise deny them from making a fully informed choice. We want consumers to be allowed to make that informed choice.

Coming only a few days after NHS Lothian announced their decision to stop funding homeopathic treatment, it’s been a great week for us batty and arrogant members of the public, who don’t care to see good money wasted on cultish nonsense.

By the way, in case you don’t know why the Society of Homeopaths who, like HMC21, would presumably have known of the adjudication against them for some weeks before it was published, didn’t join the protest outside the ASA premises, read all about it here and be joyful (or mortified, depending on where you’re coming from).

So, what was the HMC21 protest about? Some of the protesters were happy to tell me. “We think the ASA is a bit biased. We think it has an agenda,” I was told by a charming woman from Conspiraloons R Us. If the folk on Planet Homeopathy are to be believed, there is enough evidence in favour of homeopathy to sink their own spaceship. Why, they’ve got anecdotes dating back 200 years! They’ve got studies based on patient self-assessment!

In the leaflet they were giving out at the protest, they whine that,

The ASA has gone on to endorse the position that the only valid evidence in medicine comes from randomised controlled trials (RCTs), and that evidence from patients’ experience is not valid. This is a central argument of those opposed to homeopathy and other CAM therapies. It has no scientific or medical foundation, and it is dangerous.

There is no part of the above quote that isn’t absolute crap. The argument about RCTs is not that they produce the “only valid evidence in medicine” but that the results of high quality RCTs provide the best evidence we can get about whether a proposed treatment can achieve what it’s supposed to. This is because they minimise the possibility of bias, which the clinical experience and patient self-assessments that homeopaths are so fond of most certainly do not. This would be why the hierarchy of evidence that ranks systematic reviews and meta analyses of RCTs at the top is widely accepted by the scientific community.

I’m only a humanities graduate but even I can grasp this! All homeopaths have to do is come up with a study that convinces the scientific consensus that homeopathy works. In 200 years they haven’t managed to do that. The excuses range from the RCT model being wrong for the homeopathic paradigm (or some such twaddle) or that the multi million dollar industry that is homeopathy can’t afford to finance them. Hogwash!

Speaking of the scientific consensus, I was surprised to see, beneath Jerome Burne’s piece, a comment from William Alderson of HMC21 suggesting that he doesn’t know what is meant by this term.

There is an ALLEGED scientific consensus, but there has never been a study which defines who is included in this and why. Without such a study this is completely and unquestionably anecdotal evidence, both in scientific or judicial terms. A few “authorities” are quoted, but their competence is highly questionable.

For pity’s sake, you don’t need a “study” to define the term – just use a frigging dictionary. Or look it up on wiki.

Scientific consensus is the collective judgment, position, and opinion of the community of scientists in a particular field of study. Consensus implies general agreement, though not necessarily unanimity.

If the scientific consensus is that homeopathic products are capable of doing what the likes of William Alderson claim they do, it should be very easy for him to show this and HMC21 wouldn’t have had to resort to fallacious appeals to tradition and patient self-assessments in place of robust evidence.

The simple truth is that the evidence supplied by HMC21 did not meet the minimum standard of providing at least the one “adequately controlled experimental human study” very properly required by the ASA, therefore the ASA – whose remit is to protect consumers by ensuring advertising is truthful, not to help those trying to rip us off – had no option but to find against them.

I’ll leave the last word to the supremely articulate and incisive spokeswoman for the Nightingale Collaboration, who responded on Jerome Burne’s blog thus:

Our complaining about adverts may be perceived as an “attack” by those whose living depends on being able to make unsupportable claims about their products and services to the public; similarly, a mugger who is witnessed and reported to the police may also perceive it as an attack on his living. The bottom line is that it is they – not us – who are breaking rules…As ordinary consumers we have no power to influence the research, development, marketing or prescribing of pharmaceutical drugs – but we can challenge misleading claims made in healthcare advertising. Considering that a great many potentially dangerous misleading claims are made in healthcare advertising – well, at least in advertising by CAM practitioners – I am satisfied that campaigning for truthful advertising in healthcare is a worthy cause, however “seriously potty” or a “waste of valuable resources” it seems to anyone else.

I couldn’t have put it better myself. 😉