Due to their unquestioned pandering to gender ideology and reluctance to engage in reasoned and civil debate, the “skeptics” who are no longer worthy of the name are too numerous to mention. In the four years since I last posted on this blog, I have maintained a website challenging gender ideology from a feminist perspective and I now have a youtube channel as well. As I have decided to go on the offensive against the erstwhile skeptics who are selling feminists down the river and are in bed with those hurting children, I am copying below the transcript of my last two videos.

It is very concerning to see a high-profile US “skeptic” youtuber promulgate patently false information about serious medical interventions on children and young adults (see here). In my last two videos, I exposed a number falsehoods in a video by Rebecca Watson and, in the hope of reaching a wider audience, I have decided to put transcripts of these videos on my blog. My response is in two parts and it’s better on video!

Recently I watched a youtube video by self-identified “Skepchic” Rebecca Watson entitled What the Science Says About Trans Teens on Puberty Blockers. It was appalling! There is so much in it I would like to comment on that I expect this will run into two or three parts. We’ll see how I get on.

Last month Ken Paxton, the current Attorney General of Texas, published a nonbinding opinion that parents who provide their transgender kids with science-based medical care should be investigated for child abuse.

Transgender kids? What are they? I feel like I’ve already said this a million times:

When talking about anything to do with gender ideology or any other controversial topic, it’s important to be clear what you mean!

Does Rebecca agree with Jazz Jennings, who said this:

I would say that I have a girl brain and boy body and I think like a girl but I just have a boy body.

So does Rebecca think there are girl brains and boy brains and it’s possible for a girl brain to somehow find its way into a boy’s body and vice versa? Because that’s not science – that’s bollocks.

Undoubtedly some children are deeply unhappy with their sex – their sexed bodies and/or the expectations placed upon them because they are the sex they are. And sometimes – though not always – the reasons for their unhappiness are obscure. As an example of a child whose unhappiness with his sex is for not particularly obscure reasons, I would point to Kai Shappeley whose mother said this:

I remember even thinking before Kai was three that I think this kid might be gay and I thought that that could not happen and that would not happen.

We can only speculate how Kai would have felt if his parents didn’t make it so damn obvious how they expected him as a boy to be, if only they loved him unconditionally for who he is.

Even though Kai and Jazz may have been happier when their parents decided they were girls, it is unreasonable and irresponsible to say that those children are transgender because ‘transgender’ is a purely ideological concept that has nothing to do with science.

By using the term ‘transgender kids’ without any explanation or qualification, Rebecca reveals that she buys into the ideology. There may be something in her great volume of work – her youtube videos – in which she explains why she believes it though, personally, I’ve only ever seen her offer this argument:

Hello…the word ‘women’ is right there in ‘transwomen’.

Note that Rebecca uses the phrase, ‘science-based medical care’. Use of the term ‘science-based medicine’ was first advocated – must be about a decade ago now – by anti-quackery campaigners as an improvement on the more traditionally used ‘evidence-based medicine’. It was felt necessary to emphasise that some treatments like antibiotics and procedures like vaccination are based on established science and arrived at through the scientific method and are therefore at least plausible. Whether they actually work or not is established through clinical trials and other forms of evidence gathering. Whereas something like homeopathy is not science-based, most of the so-called ‘remedies’ contain no active ingredients, it is therefore implausible and can only ever achieve a placebo effect in placebo-responsive conditions as an excessive number of clinical trials have shown.

That is why, amongst those who call themselves skeptics, the phrase ‘science-based medicine’ has a positive connotation and that’s why Rebecca used it when this Ken Paxton guy, the Texas Attorney General, did not.

The words he used were “certain medical and chemical procedures”, which are neutral terms. There is nothing to suggest that Paxton doesn’t believe that these procedures are not science-based. On the contrary, it is because they have a very powerful effect that concerns are being raised about their use in adolescents. He specifies a long list of surgical procedures as well as puberty-blocking drugs and wrong sex hormones.

Let’s take those in order. Surgeries DO sound like a big deal: maybe we SHOULD restrict teens from getting elective surgery that might be difficult or impossible to reverse, right?

Yes, of course you should! A girl who has her breasts amputated will never be able to nurse an infant. In your teens you may have 25 childbearing years ahead of you. How can a girl that young possibly know…possibly be sure she won’t ever want to do that?

As for a boy losing his penis…well, this is indeed irreversible and what’s the hurry? Most men – even the most feminised – hang on to theirs.

Of course we should restrict teens getting irreversible surgeries on their healthy bodies!

Well, it turns out that we already do: current medical guidelines, by and large, suggest…

“Medical guidelines”.  Guidelines! Not laws… “guidelines by and large suggest”…what?

that teens wait until they’re 18 to have procedures like genital or chest surgeries,

Hello! A person of eighteen is still a teen. See how that works?

Rarely, teens as young as 16 have been evaluated and found to be of sure enough mind to have surgery.

This American woman – now aged 22 and ‘detransitioned’ – was 16 when she had her double mastectomy. I wonder if she was “evaluated and found to be of sure enough mind”?

Wow! Anyone who still thinks this woman is justified in calling herself a skeptic must surely be disabused already? Who could be such a mug as to think that just because medical guidelines “by and large suggest” something that everyone follows the guidelines? Would it have hurt to do a bit of research, Rebecca?

If she had, she would have undoubtedly come across Johanna Olson Kennedy’s paper published in May 2018, whose purpose was to compare chest dysphoria in young women who’ve had double mastectomies with some who haven’t.

The study started off with 92 eligible post-operative young women. 26 of them dropped out. For whatever reason, they didn’t complete the survey, leaving 68 participants and this chart shows their ages. All these are physically healthy girls and young women who had double mastectomies because they wanted to be boys. 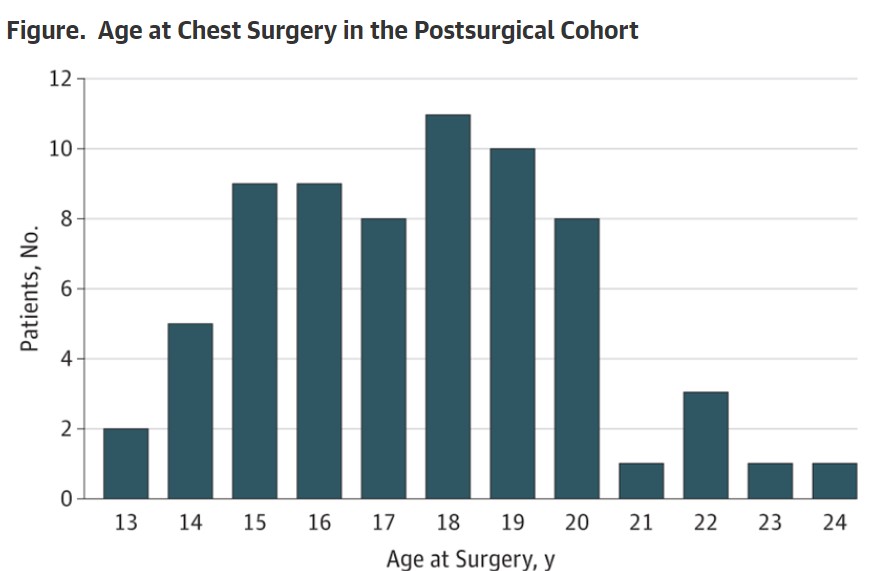 It gets worse actually.

Gender therapist Kellyn Lakhardt of the Kaiser Permanente healthcare organization in California admits that her colleagues have removed tissue from the healthy growing breasts of a confused 12-year-old girl. PAUSE. Kaiser Permanente surgeons have also created pseudo-“vaginas” from the genitals of 16-year-old boys.

How is this OK? It just isn’t. So to dismiss it as something that doesn’t really happen is big fail of your supposed skepticism, Rebecca.

I’ll comment on what she says about puberty blockers next time. Thanks for watching.