Here is the transcript of second part of my video response to Rebecca Watson.  The first part is here.

This is Part 2 of my response to Rebecca Watson’s appalling video, What the Science Says About Trans Teens on Puberty Blockers. In the first part I drew attention to the falsehoods she put out about surgery in teens about which she said this:

And I showed that this is wrong.

Now we are going to hear her mislead her viewers about puberty blockers. We start with her talking about Texas governor Greg Abbott’s directive, which was to investigate families who are transing their kids, for child abuse.

Abbott also mentions puberty blockers, though, and that DOES tend to be prescribed for teens under the age of 18. So what are they, and why do people like Abbott think that they’re abusive for teens? Puberty blockers do essentially what it says on the tin: they press the “pause” button on the flood of hormones we get when we enter puberty. They are completely reversible,

Really? It’s interesting that in 2020 the NHS amended the information about puberty blockers on its website, which once said they were considered fully reversible but no longer does so. There must be a reason they did that.

You cannot in all honesty say that the blockers are fully reversible if their long-term effects  are unknown.

in that once you decide you want to start puberty, you simply stop taking the blockers and boom, your hormones leap into action.

It’s not exactly ‘boom’, according to what I’ve read. It’s a gradual process that can take up to a year before puberty starts.

No. Gonadotropin-releasing hormone stimulates the pituitary gland to secrete the hormones responsible for the development of the gonads. That’s obviously an oversimplification but puberty blockers are GnRH analogues, otherwise known as GnRH blockers or inhibitors. They are a synthetic form of GNRH and – again oversimplifying hugely –  they cause a suppression of the secretion of the hormones needed for pubertal development.

Rebecca goes on to say that they have a variety of uses but the ones that are relevant here are, firstly, in delaying puberty in children who start what is called ‘central precocious puberty’, which is defined as starting before the age of 8 in girls and before age 9 in boys. It’s a rare condition, extremely rare in boys. They are approved by the FDA for that purpose.

And they are used for physically healthy adolescents who start puberty within the normal age range but who are diagnosed as suffering from what is called ‘gender dysphoria’. Rebecca doesn’t mention that this particular use is off-label. They are not licensed for treating dysphoric adolescents anywhere in the world.

Nor does she make the point, maybe because it’s so obvious, or maybe because it doesn’t fit what I suspect is her personal agenda of wanting to be on what she is daft enough to think will be the right side of history, that point being that when used to delay puberty in young children – precocious puberty – they are being used to treat an abnormal condition. When used by physiologically normal but mentally and emotionally distressed adolescents, their purpose is to pause their normal, healthy physical development and that should surely give us all pause for thought. As we shall see, Rebecca does not distinguish between the two uses, which beggars belief because it’s a crucial distinction and that’s another failure of her skepticism.

…after reading far more research on this than I’d honestly like, it appears to me that the medical consensus is that none of that is true: puberty blockers do NOT cause loss of bone density or sterility. A systematic review of the literature by “authors designated by multiple pediatric endocrinology societies from around the globe”

Firstly, note how Rebecca has given the impression of being extremely diligent and conscientious in her research.

Secondly, the description of the paper Rebecca quotes from as a systematic review of the literature could be a bit misleading. Usually, a research paper will state in the title what it is. 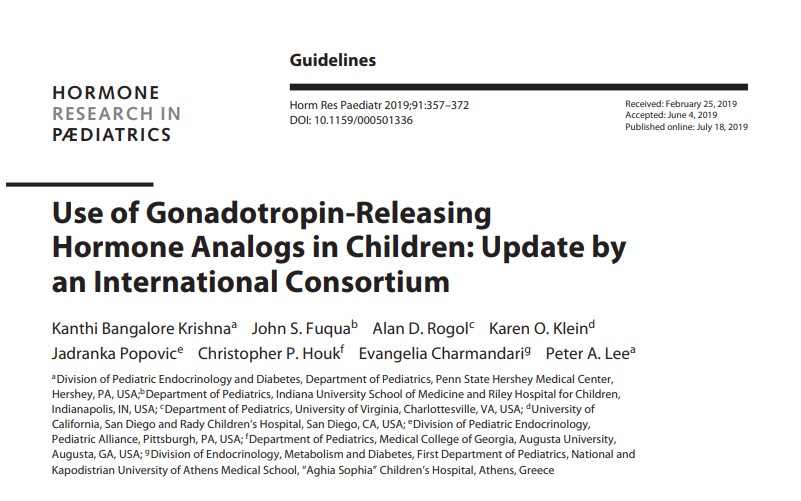 As we can see, this paper Rebecca sources is actually an update by a consortium of guidelines on the usage of puberty blockers primarily for children with precocious puberty. What the consortium set out to do was look at how usage has changed over the previous ten years. In the abstract we learn that:

Although there have been many significant changes in GnRHa usage, there is a definite paucity of evidence-based publications to support them. Therefore, this paper is explicitly not intended to evaluate what is recommended in terms of the best use of GnRHa, based on evidence and expert opinion, but rather to describe how these drugs are used, irrespective of any qualitative evaluation.

You would not know this from how Rebecca speaks of the paper and how she describes puberty blockers as if they are the last word in safety and efficacy.

As I said, the bulk of the paper deals with usage in precocious puberty. There is one very short section entitled: Use of GnRHa in the Management of Transgender Adolescents, which is literally two paragraphs. And there is one longer section at the end that deals with all the other conditions.

Now see how she quotes from that paper:

Ah ah ah…you missed something out there, Rebecca. CPP – see it?

That is central precocious puberty. There is no good evidence that the treatment reduces fertility in girls who’ve been treated for the abnormal condition of very early puberty and who, when they approach the normal age of puberty they’ve been allowed to go through it as a normal adolescent. This whole paragraph talks exclusively about kids with precocious puberty and Rebecca leaves out that crucial piece of information even in the one sentence she quotes from.

That paragraph comes from Section 6 of the paper, which is about a page and a half on long-term outcomes of treating children with precocious puberty with puberty blockers – not treating adolescents with gender dysphoria.

If Rebecca had scrolled down to the next paragraph, she would have found the whole new but extremely short Section 7 devoted to trans-identifying adolescents in which we read:

GNRHa therapy prevents the maturation of primary oocytes and spermatogonia and may preclude gamete maturation, and currently there are no proven methods to preserve fertility in early pubertal transgender adolescents.

I don’t know at how young an age they are getting them in the US. Rebecca seems to think a doctor will prescribe them to 10 or 11-year-olds and, seeing how young they are prepared to mutilate kids’ bodies in spite of the medical guidelines, it wouldn’t surprise me.

So on to bone density, which is a subject close to my heart if not my bones but then my bones are old. One of the systematic reviews cited by the consortium’s paper was this:

This is what a systematic review paper normally looks like, stating clearly in the title what it is. When we look at the abstract we learn that the objective was to

We learned that after searching a number of data banks and looking at papers over a 70-year period, only 13 studies met the inclusion criteria and these were all observational studies. Remember these were not just studies on the puberty blockers but on the other treatments, the wrong sex hormones as well.

Low-quality evidence suggests that hormonal treatments for transgender adolescents can achieve their intended physical effects, but evidence regarding their psychosocial and cognitive impact are generally lacking. Future research to address these knowledge gaps and improve understanding of the long-term effects of these treatments is required.

…and in regards to bone density, while “GnRHa treatment slows mineral accrual, after discontinuation BMD appears not to be significantly different from that of their peers by late adolescence.By late adolescence, all subjects had BMD within the normal range.

Again, in the section that is about dysphoria in adolescents, we read:

Additional changes include a decrease in height SDS and BMD along with alterations in body composition consisting of increased body fat and a decreased lean body mass [121]. The impact on BMD is concerning since lumbar spine Z-scores at age 22 years were found to be lower than those observed prior to treatment [122, 123], suggesting a possible permanent decrement in BMD. Thus, it is unclear how long GnRHa can safely be administered.

So what Rebecca Watson has done after claiming to have ‘read far more research than she would have liked’ is give out false information. Shameful.

A word from endocrinologist Michael Laidlaw–

OK, thank you if you’ve stuck with me this far.

I have found making these two videos in response to Rebecca Watson’s nonsense rather more upsetting than I thought I would, so I’ve decided to stop here. I think I’ve said enough for the time being to show that Rebecca is misleading people. The other claim she makes that I’m not going to examine now is that puberty blockers are necessary to save lives. That is definitely a claim that one should be extremely skeptical of and, as we’ve seen, Rebecca has lost any ability she may have once had to be skeptical. Like so many erstwhile skeptics she is too subservient to the cult to think clearly and rationally and she has said demonstrably false things about the evidence she herself provides for the other claims she makes.  My god she even said this!

You take the puberty blockers, let’s say, for a few years, and at 16 you decide that yes, you would like to transition to the opposite sex.

Opposite sex? Not even gender – sex! She is actually saying you can change sex.

OK, I’ve had enough of her. Thanks for watching. Bye.